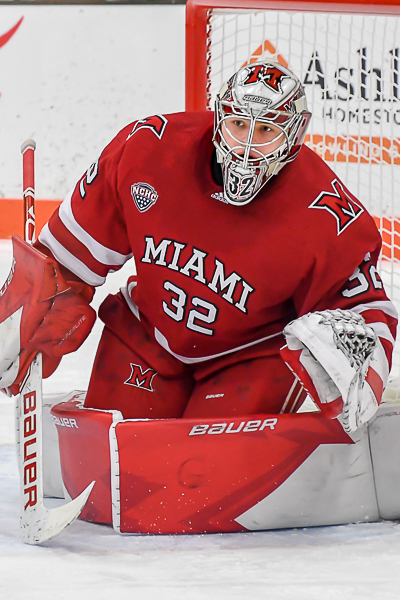 Miami’s 2021-22 goaltending trio finished with a save percentage of .887, sixth-worst in Division I.

But the final 12 games after the St. Cloud massacre, Ludvig Persson – the team’s anchor in net who played every minute of that final stretch – stopped pucks at a .919 clip.

“That last (six) weeks he was definitely himself and he would say that,” coach Chris Bergeron said. “His numbers would’ve been better had we not found ways to lose. He looks good, he looks fit. Mentally, I think he’s in a good place.”

In addition to Persson returning, Logan Neaton is fully healthy after suffering a major knee injury, and three-year Ferris State veteran Carter McPhail has transferred in after posting decent numbers in a small sample size with the Bulldogs.

View From the Glass takes a look at the goalies in Part IV of our 2022-23 Miami Preview series.

ANALYSIS: Persson has logged the overwhelming majority of minutes in net for Miami the past two seasons, and it appears he will patrol the cage most of the time again in 2022-23.

His rookie season he posted a 2.62 goals-against average and .925 save percentage despite poor defensive support.

In 2021-22 he suffered through an early sophomore slump and was left in to allow all 19 goals in 19-1 weekend, but a rejuvenated Persson returned to form the final six weeks despite being pelted with shots.

“He looks great, he looks like Ludvig,” Bergeron said. “The only fear there is he puts too much on himself, too much pressure, thinks he has to do more than just his part.”

Neaton is 100 percent after getting hurt Jan. 7. He struggled with confidence early last season but was playing well before he went down, turning aside 35 of 36 shots against Long Island on Nov. 27 to earn his first NCAA win.

Neaton, a 2019 Winnipeg Jets fifth-round draft pick, logged just 224 minutes with UMass-Lowell before transferring to Miami and hopes to maintain the momentum he had gained prior to his injury.

He finished last season with an .887 save percentage and he is at .874 for his career.

McPhail was a late addition after Kirk Laursen transferred to Western Michigan. In just 44 minutes last season with Ferris State, he posted a .920 save percentage.