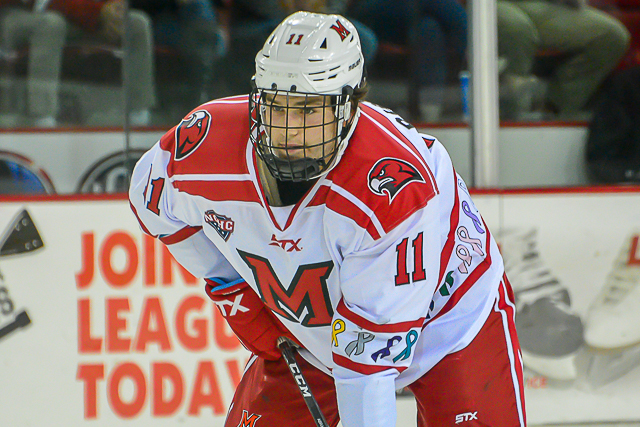 OXFORD, Ohio – There was a familiar scoring pattern in Miami’s regular season finale.

The RedHawks fell behind by two, came back and tied it then allowed the final two in a 4-2 loss to Western Michigan at Cady Arena on Sunday.

WMU (10-11-3) had taken a 2-0 lead, seen it slip away then rallied for the last three markers in Kalamazoo on Friday.

RECAP: After a scoreless first period, the Broncos’ Ethen Frank skated through a pair of RedHawks defenders at the blue line and beat Miami goalie Ludvig Persson 1:03 into the middle frame.

Four minutes later, Luke Grainger tapped home a pass from Michael Joyaux at the side of the cage on a 3-on-1 to give WMU a 2-0 lead.

But the RedHawks’ Robby Drazner whipped a shot just under the short-side crossbar on a 4-on-4 less than four minutes after that tally.

Miami tied it 2:01 later when Rourke Russell fired a shot from the point the went wide of the net, caromed off the back of Broncos’ goalie Brandon Bussi and into the net.

But with 13:37 left in regulation, Western Michigan regained the lead for good when Scooter Brickey eluded a pair of defenders with a pass through the slot to a wide-open Ronnie Attard, who ripped home a one-timer from the top of the faceoff circle.

Attard sent Paul Washe in for a breakaway empty netter with a stretch pass up the middle of the ice in the closing seconds.

STATS: Drazner picked up a primary assist on Russell’s goal, as he recorded his first career multi-point game.

— Russell, a senior, netted his second marker of the season, giving him a career high. It was his fourth Division I goal.

— Matthew Barbolini picked up an assist, giving him five points in five games. Gilling’s helper gave him a point in his second straight game, and Monte Graham earned the other assist, his first point in eight contests.

— Miami allowed multiple third-period goals for the third straight game and has surrendered 23 last-stanza tallies in their last 12 games, or an average of 1.92.

THOUGHTS: First, what a relief to see Persson back in net after he took a knee to the head in Kalamazoo two nights earlier.

Beyond hockey and his status as the projected No. 1 netminder the next three seasons, that was a violent shot that could’ve had long-term effects.

Fortunately for Persson both on and off the ice, it wasn’t a major concussion and he was back between the pipes after that violent collision on Friday.

That all said, he was run into twice more in this game, drawing an interference penalty once. Recall that backup Grant Valentine also got knocked down near the end of Friday’s game.

One more time, then it gets to put to rest: This team has to stick up for its goalies. Not talking injuries, suspensions, etc., but Miami can’t let these guys skate away without getting someone in their faces.

Coach Bergeron is trying to build back a team that can compete in this league. Let’s start with having players stick up for one another, a key component to a successful team.

In this game, the intensity level just wasn’t there down the stretch. The RedHawks ended up with five shots in the final 20 minutes, and none particularly memorable.

Phil Knies was whistled for a questionable tripping penalty in the final two minutes, so the final goal was actually on the power play into the empty net, as the RedHawks pulled Persson to get a 5-on-5 while in desperation mode.

— Miami did hold WMU to 28 shots, but the Broncos took advantage of their Grade-A chances.

Frank somehow skated right through Crowder and Hampus Rydqvist for a breakaway and found the twine.

The second goal was the result of sort of a broken 3-on-1 passing play that somehow ended up the stick of Grainger, who didn’t miss.

And the highlight-reel pass by Brickey was wired home by Attard on the long-range one-timer as WMU made something out of a relatively innocuous zone entry.

We hear the word “opportunistic” thrown around in the hockey world quite often. That’s exactly what the Broncos were in this game.

Western Michigan was more impressive than Miami was disappointing. Especially with their star goalie Bussi back, the Broncos will be a tough out as we head to single elimination for the balance of the season.

LINEUP CHANGES: Michael Holland and Brian Silver dressed for the RedHawks up front after sitting out the home opener.

Defensemen Dylan Moulton and Alec Capstick both were scratched, as Miami suited up seven defensemen instead of eight and shifted Bray Crowder back to the blueline.

STANDINGS: The RedHawks end up 5-17-2 in the NCHC, tied for last in the league with Colorado College, as both have 18 points.

That means Miami heads to the Ralph in less than two weeks to face host North Dakota, the top seed and No. 1-ranked team in the NCAA.

FINAL THOUGHTS: …and if the RedHawks somehow win that game, two more of the best teams in Division I await in the Frozen Faceoff.

So Miami’s path to the NCAA Tournament is longer than the bus ride there. One can almost hear the cliché players in such a situation feed reporters about having to take it one game at a time.

But hey, there is hope from a historical standpoint, which means it’s time for my annual reminder that Miami – again as an eight seed – did sweep then top-seed St. Cloud State on the road in a best-of-3, won the semifinal and came within a near-miss shot of forcing overtime in the 2014 championship game.

Though frankly, the odds are longer of this Miami team getting that far.