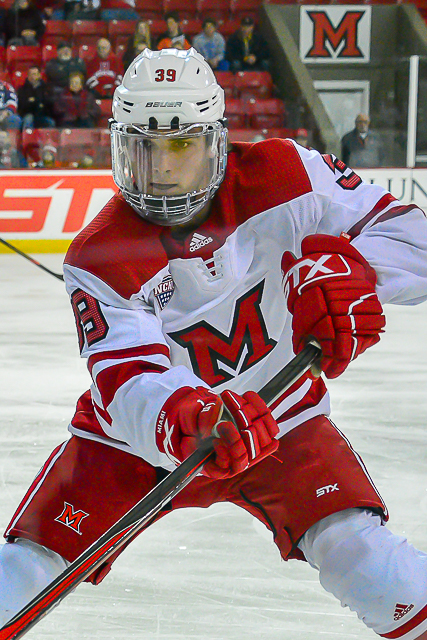 OXFORD, Ohio – Miami held No. 6 Minnesota-Duluth to four shots in the first period.

Unfortunately for the RedHawks, two of them – plus another snipe 1:57 into the middle frame – found their mark as the Bulldogs’ early three-goal keyed a 6-3 win over MU at Cady Arena on Saturday, completing a series sweep.

RECAP: The Bulldogs opened the scoring 5:21 into the first period on the power play when Koby Bender drew a defender to him in the high slot and fed Koby Roth at the faceoff dot, and he connected with Jackson Cates at the side of the net, and Cates shoveled it in.

Nick Swaney made it 2-0 UMD – again on the man-advantage – when he carried the puck into the high slot and whipped a wrister past Miami goalie Ben Kraws low to the glove side with 5:40 to play in the opening stanza.

Quinn Olson gave Minn.-Duluth a three-goal lead less than two minutes into the middle frame when he joined the rush, took a feed at the blue line, skated to the goal line on the left wing with heavy traffic at the top of the crease and roofed a bad-angle shot past a sprawling Kraws.

Miami trimmed its deficit to two when Derek Daschke wristed a shot in from the blue line that John Sladic was able to tip home from the slot on the power play with 14:46 left in the second period.

The Bulldogs regained their three-goal lead when Luke Loheit redirected a slap shot from the left points to make it 4-1 at the 5:58 mark of the final frame.

Just 22 seconds later, Matthew Barbolini slid a pass through three UMD defenders from along the end boards to Casey Gilling, who ripped it home from the slot.

With 7:33 remaining, Tanner Laderoute was denied on a point-blank chance by Kraws, but he carried the puck behind the goal and centered to Koepke, who banged it into the open net with Kraws unable to recover, making it 5-2.

Miami again trimmed the lead to two on a two-man advantage, as Barbolini corraled a rebound off a wrister by Daschke and lifted it over a sprawling Ryan Fanti at the side of the cage with 3:39 left.

Koepke sealed it on an empty netter in the closing seconds.

STATS: Gilling and Daschke both finished with two points, with Gilling going 1-1-2 and Daschke picking up a pair of assists.

It’s the second multi-point game for Gilling in his last three, and Daschke moved into third place on the team in points with nine.

Gilling’s goal was his first of the season and snapped an 18-game drought.

— Sladic netted his second goal of the season, and Barbolini recorded his third and ended a seven-game skid.

— Defenseman Hampus Rydqvist picked up the first helper of his NCAA career, and it was the first assist of 2020-21 for Sladic.

The shots were 4-4 through one period but 31-28 in favor of Miami the final two periods, making this the second game in the RedHawks’ last 20 in which they have outshot an opponent.

This was just the second game this season in which the RedHawks scored two power play goals.

THOUGHTS: The score doesn’t reflect it, and yes, the outcome was never in doubt, but Miami didn’t play badly in this game.

The first four minutes were even, and then the RedHawks went down a man and UMD took advantage.

That seemed to deflate Miami, which seems to happen too often when MU is scored upon.

The next two tallies went to the Bulldogs, and essentially that was game, set and series.

That said, the RedHawks continued to battle back and put 31 shots on goal the final 40 minutes. For context, Miami had only had that many shots in an entire game once previously this season.

And this was against the sixth-ranked team in Division I hitting on all cylinders, scoring highlight-reel goals as it prepares to make a run at a third consecutive NCAA championship.

The start was bad, granted, but on many previous occasions over the past couple of seasons Miami has folded up the tent when it has gone down multiple goals early. This team kept fighting until the final horn.

— Kraws started for the first time since Dec. 20, although he did relieve starter Ludvig Persson last Saturday at St. Cloud State.

The second goal from the high slot was maybe one he would’ve wanted back, and he seemed to lose sight of the puck on UMD’s third goal as Olson tucked it in the near side of the net uncontested.

He made a great sprawling save right before the first Koepke goal and other quality stops.

— Moving Bray Crowder to forward may solve both Miami’s current shortage of forwards and glut of defensemen.

Crowder finished with three shots on goal and could prove valuable as someone who could camp out in front of opponents’ nets to clean up loose pucks. Plus he could always shift back to defense in-game if necessary.

— Daschke’s stick was held for several seconds a in full view of the refs seconds before UMD scored its fourth goal. Pretty bad missed call.

— Rarely criticize Bergeron’s in-game coaching, but he dropped the ball by not pulling Kraws earlier with his team down by two. There was 1:40 left and Miami was set up in the UMD zone, but no one acknowledged Kraws.

He finally skated to the bench with less than a minute remaining.

— Looking at the replay, it appeared from this perspective that Barbolini made the highlight-reel pass to Gilling into the slot that led to his goal. Olmstead has been credited with the primary helper. A couple of Bulldogs assists were questionable as well.

LINEUP CHANGES: Due to injuries to Ryan Savage and Scott Corbett on Friday, coach Chris Bergeron — as mentioned above — moved Crowder to forward and dressed Caleb Rule up front.

Alec Mahalak was also back in the lineup, as Miami played nine of its 10 defensemen – eight on the blue line plus Crowder on the wing.

Kraws snapped a string of seven straight starts by Persson in net.

STANDINGS: Miami remains tied with idle Colorado College for last place in the NCHC, but the Tigers now have two games in hand over the RedHawks.

MU has six games remaining in its regular season and CC is slated to play eight.

FINAL THOUGHTS: A healthy way to look at this game is that a very good team took care of business.

This was more about the Bulldogs playing well than the RedHawks struggling.

The first UMD goal was the result of brilliant offensive-zone passing and the team appeared to take advantage of every scoring opportunity.

Version 2020-21 of Minn.-Duluth is better than this season’s Miami team, and unfortunately for the RedHawks, they wrap up their six-game regular season set in Duluth.