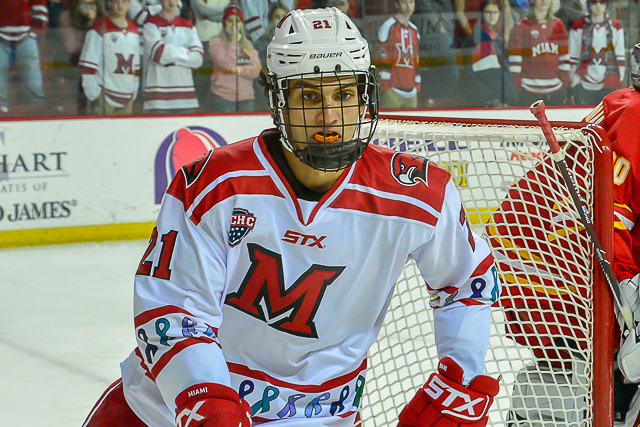 OXFORD, Ohio – Apparently having fans in attendance does affect team performance, as home-ice advantage has been an oxymoron for Western Michigan and Miami.

After the RedHawks swept the Broncos in Kalamazoo last weekend, WMU won 4-1 over Miami in MU’s home opener at Cady Arena on Friday.

RECAP: The first period started well for Miami (4-8-1), which opened the scoring at 3:13 when Ryan Savage buried a wrister from the slot off a feed from Matt Barry on the power play.

But with 1.2 seconds left in the opening frame, the puck emerged from a scrum in front of the RedHawks’ net, and WMU’s Ronnie Attard roofed it puck on his backhand.

Josh Passolt blasted a one-timer home from the center of the faceoff dot on a dish from Aidan Fulp with 11:41 left in the second period on the power play, putting Western Michigan (3-8-2) ahead, 2-1.

On a 3-on-1, the Broncos scored again on the man advantage, as Drew Worrad slid a pass to teammate Ty Glover, who skated in alone and beat Miami goalie Ludvig Persson on the backhand with 6:43 left in regulation.

Western Michigan sealed it with 1:26 left when Paul Washe lifted a pass through two zones, and Jason Polin was able to corral it, elude a defender and shoot it into the empty net.

STATS: Barry and Casey Gilling picked up assists on the Savage goal.

Barry has six points in his last six games and leads the team with nine points overall. Gilling extended his points streak to three games.

It was Savage’s first goal of the season, but he missed four games due to injury, and he now has points in back-to-back contests.

— It was the first time since Dec. 8 – the fourth game in the Omaha Hub – that Persson has allowed more than one goal.

— The RedHawks scored on the power play again and are 4-for-9 in their last three games after a 2 of 32 start. Unfortunately they allowed two PPGs in three chances.

THOUGHTS: I expected it to be weird, returning to the rink under strict protocol and without fans, and the COVID Cady experience was just that.

Temp checks to get in, major rink access restrictions, mask requirement, and of course, empty stands.

Well, mostly empty as Miami is one of the few NCHC schools allowing family to attend. And not to get into the COVID debate, because what’s the saying about opinions being like a part of the body?

Especially opinions about this pandemic.

But it seems like Cady is the type of rink that is built to accommodate a small percentage of capacity under these circumstances. It has high ceilings, wide concourses and a spacious seating bowl.

With players, coaches, families of both teams, ushers, Miami personnel, media, police, etc., I would guess there were about 200-250 people in the building. And there was no congestion anywhere, except maybe in the RedHawks’ defensive zone most of the night.

It was still amazing to be in this beautiful rink after an absence of over 10 months. My first live sporting event since Ryan Larkin completed a shut out sweep of Omaha on Senior Weekend.

And yet it was sad not to have the “game day” experience. No hot dogs, no talking with friends during intermission, no chants, no band.

It obviously wasn’t anywhere near the same, but being able to get back into the rink more than makes up for any of the missing so-called “normal” things about game night that makes Miami hockey so special.

— The game itself started so well but ended up a huge disappointment.

Miami played its first few shifts like its skates were on fire, culminating in Savage’s power play goal.

But after the first 10 minutes, Western Michigan was the better team for the balance of the evening.

The end of the first period was a worst-case scenario for Miami. WMU took all the momentum into the locker by scoring with just 1.2 seconds left.

The shots in the second period were 16-3 Broncos. Western Michigan led in that column, 13-6 in the final stanza as well.

The RedHawks just couldn’t generate any kind of offense. Coach Chris Bergeron changed his lines up to try and get something going, but to no avail.

The puck movement and passing on that power play goal was outstanding. After that completed passes were a rarity.

We’ve been talking about inconsistency for a long time now. Friday was Exhibit A.

— As a follow up to the above thought, the kicker on shots is: Miami had seven minutes of power play time in the third period.

The major (disaster) came 2:17 into the frame, and the RedHawks were only down one at the time. Miami generated one shot and allowed four – including a breakaway that Persson shut down – during those five minutes.

The two power play minutes following the minor just a minute after the major expired weren’t any better.

— Miami is still allowing too many odd-man chances by being out of position, and a better team would’ve capitalized on some early miscues.

The third WMU goal on the power play was a prime example, as three Miami skaters were at the left point trying to clear the puck, which left the rest of the Broncos-on-1 in the rest of their offensive zone.

— Crazy that the team that has scored the first goal in each of these three games has not only lost each time, it has not found the net again in any of those contests (3-1, 5-1, 4-1).

— Savage finally broke out with a goal. He was streaky last season, hopefully we’ll see him find the net more soon.

LINEUP CHANGES: Just one, but it hurt: Scott Corbett was scratched.

Corbett has played excellent defense and provides a physical presence up front.

Chase Pletzke was back in the lineup after missing the last two games.

STANDINGS: Western Michigan pulled to within three points of Miami.

The Broncos could move into a three way tie with the RedHawks and Colorado College with a win.

Miami couldn’t survive a late first-period scrum, Western Michigan was a completely different team when it hit the ice for the middle stanza.

The RedHawks’ offense was M.I.A. the rest of the night. The Broncos tried their hardest to allow Miami to tie it, with seven minutes of dumb penalties in the third period, but they ended up getting the better looks during those penalty kills.

We come back to consistency.

Miami looked great most of last weekend in Kalamazoo, and after 10 minutes tonight it felt like there was no doubt the RedHawks were the better team. As in overall, not just on this night.

Then the tying goal. Then WMU went ahead. Then the Broncos sealed it.

And Miami never put up a fight.

The RedHawks have definitely made strides this season and will eventually reap much success under Bergeron, but games like this show Miami is still a ways away from becoming a top program again.