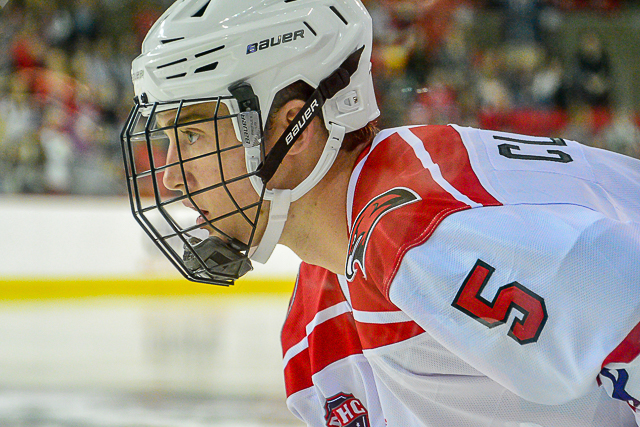 Miami closed out its pod schedule with a whimper.

No. 3 North Dakota scored the final four goals as it pulled away from the RedHawks in a 6-2 win at Baxter Arena on Sunday.

MU tied it at two with 13:14 left in the second period, but the Fighting Hawks (7-2-1) answered by taking the lead less than two minutes later and adding two more markers in the closing minutes of the middle stanza, plus one more in the final frame to seal it.

The RedHawks finished 2-7-1 in the Omaha pod, and the balance of the regular season will be played on league campuses.

RECAP: UND’s Jasper Weatherby fired one from the faceoff dot that deflected in off Miami goalie Ben Kraws to open the scoring on the power play 4:54 into the game.

The RedHawks tied it exactly three minutes later when defenseman Derek Daschke was left alone in the slot and fed fellow blueliner Jack Clement, who slapped a one-timer home from the bottom of the faceoff circle.

UND regained the lead 3:24 into the second period when Griffin Ness slid a pass through the high slot to Riese Gaber, who collected the puck and wristed it home to make it 2-1.

Miami again evened the score when Matthew Barbolini deked a defender at the blue line, skated into the zone on the left wing and whipped one past goalie Adam Scheel with 13:14 left in the middle stanza.

But Gaber scored again to put North Dakota ahead for good less than two minutes later when he ripped a one-time pass home from the high slot.

Shane Pinto tipped home a Gaber wrist shot from the blue line at the 11:52 mark of that frame to make it 4-2.

Collin Adams gave UND a three-goal lead when he tipped home a centering pass from Grant Mismash at the edge of the crease with 3:52 left in that period.

Ethan Frisch sealed it with 9:42 remaining in regulation when his wrister off a drop pass by Mark Senden on the rush found the far top corner of the net.

STATS: It was the first career multi-point game for Barbolini, who finished 1-1-2.

— Clement’s goal was his first of the season and snapped a 23-game goalless skid.

— Only two assists were awarded to Miami in this game, and Daschke picked up the other – his second of the season – on his feed to Clement.

— With five goals allowed in the final 40 minutes, Miami has now been outscored, 25-10 after the first period.

— The RedHawks actually gave up a power play goal, the first time an opponent has broken through on the man advantage in six games. MU has an 87.1 percent penalty killing rate.

THOUGHTS: Sunday nights are rough for viewing games, and I was only able to watch about half on the phone and listen to most of the rest.

But it sure seemed like that go-ahead goal less than two minutes after Miami had tied it at two was the nail in the RedHawks’ proverbial coffin.

LINEUP CHANGES: Kraws was back in net after freshman Ludvig Persson had played the previous two games. Both played – and finished – five games in the Omaha pod.

Scott Corbett was back in the lineup after missing the previous two games with a supposed injury, and forwards Jack Olmstead and Caleb Rule also returned to the ice after sitting for two and one games, respectively.

On defense, Hampus Rydqvist, who was injured last game, and Rourke Russell, were out of the lineup, and Alec Capstick returned to the ice after sitting in Game 9.

The RedHawks were 2-7-1 in Omaha and are three points behind sixth-place Colorado College, which also has two games in hand over Miami.

Obviously Miami did not play any non-conference opponents, but the RedHawks played a pretty fair matrix of games vs. the caliber of opponents it would face in a normal season, so this is a pretty fair indication of where MU’s program currently is.

The RedHawks didn’t play well in either game against Colorado College and as a result are three points back of the Tigers for sixth place.

Miami is tied with Western Michigan for the final spot.

The teams have not met yet in 2020-21, but they play the next four games against each other and two more in a home-and-home to end the season.