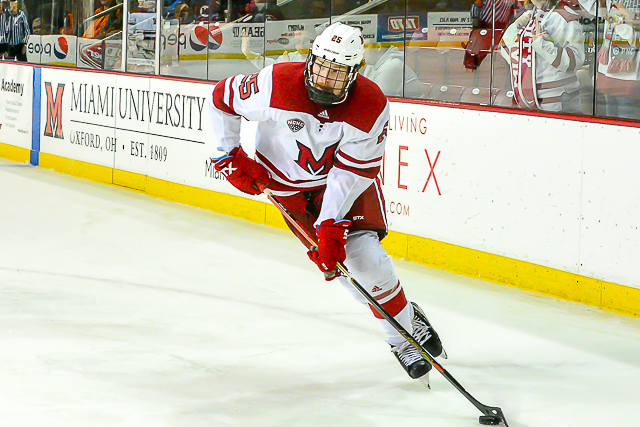 Nebraska-Omaha and Miami were tied after 60 minutes, but the Mavericks needed just 17 seconds of overtime to net the game-winning goal.

UNO edged the RedHawks, 2-1 in the extra session to hand them their second straight loss to open the season.

RECAP: The game was scoreless through the first period and a half, but Omaha took the lead with 8:08 left in the second stanza when Chayse Primeau tipped home a blue line wrister by Brandon Scanlin at the top of the crease on the power play.

Miami tied it with 9:15 left in regulation when Matt Barry stole the puck in the RedHawks’ offensive zone and slid it through the slot to Ben Lown, whose rip was stopped by goalie Isaiah Saville, but the rebound was backhanded home by Corbett.

Just 17 seconds into overtime, the Mavericks’ Joey Abate fed a pass through the slot to Martin Sunberg, who shifted from his backhand to his forehand, skated in alone and shoveled the puck under Miami goalie Ludvig Persson to win it.

The team he scored against that night? Nebraska-Omaha.

— Lown also broke out of a funk, picking up an assist for his first point in 11 games.

— Barry picked up the secondary assist, his fourth helper in six contests.

— Miami was 0-for-5 on the power play and did not have a shot during its first three tries on the man advantage, which included a five-minute major.

THOUGHTS: The ending was disappointing, as UNO started from behind its own net and its three skaters basically beat Miami down the ice for a slam-dunk goal.

Disappointing as well has been the RedHawks’ utter lack of scoring. They have one goal in two games and were absolutely dreadful on their ample power plays, lacking communication and any kind of ability to put the puck on net.

That said, the effort overall was excellent again, and that should ultimately translate to wins. The feeling still exists that this team is getting better.

– Another positive: It didn’t feel like it was open season on the Miami net like it has been far too often the past few seasons. The RedHawks made Omaha earns its chances – same with the North Dakota game – and defended the Mavericks’ top weapons pretty well overall.

– The power play has been inexplicably bad. Miami is 0-for-9, and the RedHawks can’t even seem to complete uncontested passes in the offensive zone at times. What’s hard to comprehend is most of the skaters who have struggled on the man advantage are juniors and seniors who obviously should be used to playing with each other.

– Ryan Savage did not return for the second or third periods after sustaining a hit in the opening 20 minutes. UNO’s Kevin Conley hit him in the head with his shoulder and was given a major penalty and game misconduct.

– Persson was outstanding in his debut. His positioning was excellent and his rebound control nearly perfect. The first goal he allowed was on a tip from the crease, which he had no chance of stopping, and the game winner was essentially a breakaway.

His play and that of Ben Kraws in Game 1 have been extremely encouraging since there was uncertainty at that position heading into this season.

– Coach Chris Bergeron played four skaters and Persson who did not dress in Game 1.

Forwards Brian Silver and Lown were in the lineup, as well as defensemen Dylan Moulton and Alec Mahalak.

Among skaters, only Joe Cassetti and Alec Capstick have not played a game this season.

LINEUPS: Covered most of this above, but Rourke Russell and Robbie Drazner were scratched in favor of Mahalak and Moulton.

Up front, Lown and Silver dressed in place of Caleb Rule and Michael Holland.

And of course, Persson was in net after Kraws started Game 1.

STANDINGS: With the overtime point, Miami is now in sixth in the the NCHC, ahead of 0-2 Western Michigan, and Colorado College, which has not played a game.

FINAL THOUGHTS: Obviously this is still just the second season of Bergeron’s tenure, and Miami’s trajectory is solid.

Sometimes that doesn’t make a loss like this any easier to swallow, especially after a half decade of consistent losing.

Next up is a ‘home and home’ vs. Minnesota-Duluth, another top-5 team in the polls in a league that has no mercy for the rebuilding RedHawks.

One thought on “Omaha sinks Miami in OT”