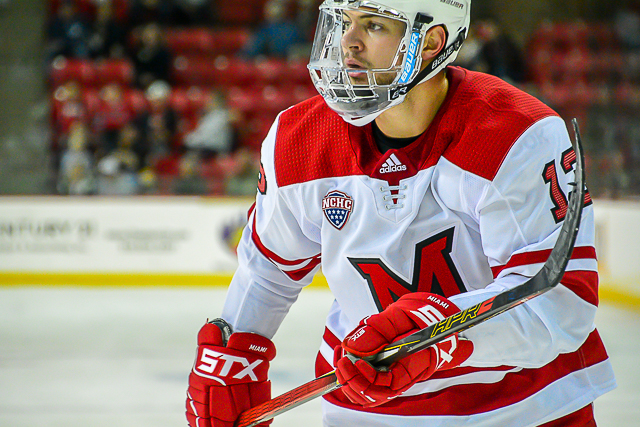 Chris Bergeron’s second season at the helm of the RedHawks will be anything but normal.

Two months after its season was initially slated to start, Miami begins its 43rd varsity season in Nebraska-Omaha’s league bubble on Wednesday, in which it will play 10 games in 21 days.

The RedHawks will play 26 games overall, all vs. NCHC opponents. The balance of their schedule will be played at campus sites in January and February.

Miami has posted losing records five straight seasons, and its winning percentage of .309 in 2019-20 was its lowest in 30 years.

View From the Glass takes a look at this season’s RedHawks by position.

Only three teams in Division I were worse at generating shots last season: Cornell (which played five fewer games than Miami), Brown and Alabama-Huntsville.

That’s despite Karch Bachman ripping 130 of them, the 13th-highest total in college hockey.

NOTES: Both 10-plus goal scorers from up front are gone, and the RedHawks will need to rely on forwards who didn’t roll up big totals last season-20.

Casey Gilling went 9-22-31 and is tops in all three categories among returning forwards. His 108 career games played is also the most of any Miamian on the roster.

Chase Pletzke also recorded 14 points, including six goals, and he netted four during a nine-game window while Miami was playing its best hockey midway through the season.

John Sladic netted seven goals, tied for fifth on the team, and added six assists, impressing as he made the huge jump from the NAHL to the NCAA.

Monte Graham, the lone junior among this group, scored five goals and added eight assists, nearly doubling his points output from his freshman season, and he improved in a number of non-quantitative categories as well.

Matt Barry should be a huge factor this season, as the Holy Cross transfer posted 11 points in 17 games upon earning eligibility Dec. 30.

Ben Lown and Phil Knies are three-season starters who have played a combined 200 games and bring ample experience to this fairly young corps.

Opportunity for playing time should be abound for the newest RedHawks, as just nine forwards are returning and 12 or 13 dress each night.

Miami has six first-year forwards, and Joe Cassetti and Matthew Barbolini are favorites to earn two of those lineup slots.

Defense was a weakness for Miami last season, as this corps lacked physicality and far too often got itself out of position, leading to way too many high-percentage shots by opponents.

MU has 10 defensemen on its roster, and with seven boasting starting experience in 2019-20, competition for lineup spots should be fierce.

NOTES: The stud among this group is Derek Daschke, who would have already won several awards had he not played on a cellar dweller the past two seasons.

Just a junior, Daschke is already on Miami’s all-time leaderboard in career defensemen goals (16) and single-season goals by a blueliner in 2019-20 (10).

Beyond his goal scoring, his puck movement and shut-down ability are already at a high professional level.

Two senior three-year starters return in Rourke Russell and Alec Mahalak. Russell went 1-12-13, and Mahalak could not catch a break in terms of injuries and was held to two points in 21 games.

Jack Clement, a sophomore, showed a ton of promise and was on the top pairing much of last season, and he played much of the second half with an injury.

Juniors Bray Crowder and Andrew Sinard are both at least 6-feet, 6-inches and both played 27 games on the Miami blue line. Sophomore Alec Capstick logged 26 games.

Freshman Hampus Rydqvist had a 41-point season in the NAHL, his first season in North America, and 6-feet, 3-inch Robby Drazner went 5-30-35 in 58 games for BCHL Nanaimo. Both are expected to challenge for lineup spots.

Ryan Larkin set a Miami record by logging nearly 7,000 minutes in net during his career, and with him not projected to start between the pipes heading into the season for the first time since the fall of 2015, someone else will have to take the reins.

The RedHawks have two returning goalies and one intriguing freshman to choose from as they move on from their four-year starter.

NOTES: All three goalies can make a compelling case for starting, but there are also question marks surrounding each, which should make for an interesting competition this season.

Grant Valentine is the senior, he’s survived the coaching carousel, he led the team in goals-against average last season (3.32). In his three starts last season, he tied at Omaha, lost 2-1 against St. Cloud and gave up five when his defense deserted him a night later. Despite his lack of playing time the past three seasons, he stepped up when Miami needed him.

The downside: Valentine only played nine minutes his first two seasons, so scouting reports could expose him if he becomes a starter.

Ben Kraws played a stellar game on Nov. 23, stopping 32 of 33 shots in a win at Omaha. He has good size and moves well for a bigger goalie. Kraws is still just 20 and already has 80 games of experience at the USHL and NCAA levels.

Kraws wasn’t as strong down the stretch last season, as the amount of high-quality shots he faced seemed to wear him down mentally.

Ludvig Persson couldn’t have been much better in his North American debut, recording seven shutouts and posting a 1.56 goals-against average and .932 save percentage. His percentage has never been below .905 at any level the past three seasons.

But 28 games in the NAHL is a small sample size, and he wasn’t facing many difficult shots. This season will be a 180 degree turnaround, as he will likely see a lot of rubber every night with the RedHawks.