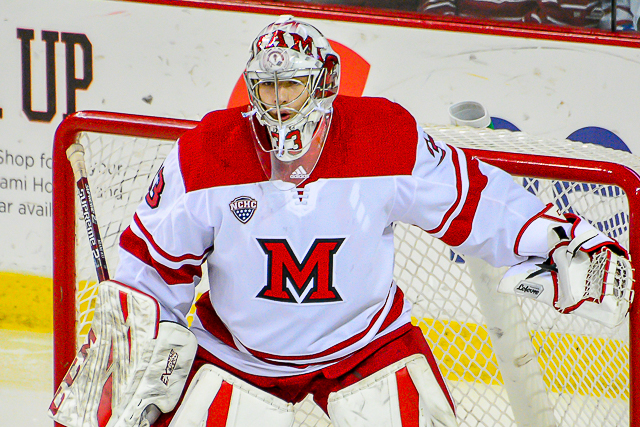 Miami took an early 2-0 lead, was ahead by one after the first period, No. 1 North Dakota eventually tied it and scored the go-ahead goal in the closing moments of the final frame.

Unfortunately for the RedHawks, unlike Friday when the teams ultimately skated to a tie as the Fighting Hawks’ last-minute tally was waved off, UND’s marker with 1:04 remaining in regulation of the series finale stood as the RedHawks fell, 5-3 at Cady Arena.

RECAP: The RedHawks jumped out early on a power play goal by Derek Daschke, which he scored on the power play on a wrister from the top of the left faceoff circle off a feed from Casey Gilling.

Miami capitalized on another man-advantage exactly two minutes later, as Gilling’s initial shot from the right faceoff dot was denied, and after his follow-up shot was also stopped, Phil Knies swept home the loose puck to make it 2-0.

Just 43 seconds later, the Fighting Hawks got on the board, as Harrison Blaisdell saw his 3-on-2 shot turned aside by RedHawks goalie Ben Kraws but Judd Caulfield eventually jammed it in during a scramble at the top of the crease.

Twenty seconds into the second period, UND’s Shane Pinto – left all alone in the slot – ripped a one-timer past Kraws on the stick side off a feed from Jordan Kawaguchi to tie it at two.

Miami regained the lead on its third power play goal of night on a tic-tac-toe pasasing play, with Daschke at the point feeding Gordie Green down low and Green sending one through the crease to Karch Bachman for the one-timer to make it 3-2 with 50 seconds left in the middle stanza.

But the Fighting Hawks would run off the final three tallies.

They tied it at the 4:24 mark of the third period when Kawaguchi skated into the offensive zone along the boards, cut across to the slot uncontested and found twine with a wrister.

Cole Smith put North Dakota ahead on a backdoor cut with 64 seconds to play when Matt Kiersted sent a pass through traffic to Smith at the side of net, and Smith shoveled it in to make it 4-3.

Westin Michaud tacked on the empty netted with 27 seconds left.

STATS: Daschke, Green and Gilling all finished with two points, with Daschke going 1-1-2 and the latter two picking up a pair of assists.

Gilling ended the weekend with six points, and Daschke scored for the third time in four games, and it was his fifth multi-point game of the season.

Green extended his points streak to seven games and has points in 13 of his last 14 games.

He now has 106 points for his career, moving him into a tie with Randy Robitaille and Greg Dornbach for 47th on the Miami all-time leaderboard.

— Knies snapped a 13-game goal drought and picked up his third point in four games, Bachman found the net for the eighth time and has points in 10 of 11 contests.

— Miami scored three power play goals in a home game for the first time since Oct. 28, 2017 vs. Connecticut.

— The RedHawks scored five first-period goals this weekend and have 10 in their last five games. The opening stanza has been their best in terms of scoring, as they have 28 tallies in that frame vs. 19 in the second and 20 in the third.

THOUGHTS: Miami, which almost lost on a late goal on Friday and did lose that way on Saturday, was out of gas by the end of this one.

Green and Gilling practically needed oxygen masks on the bench as they logged time on each penalty kill, and – of course – all of the power plays.

And there was a lot of special teams play this weekend.

The decisive goal was all too predictable, as Miami was on fumes the final few minutes of regulation, and Kraws was a key reason the score remained tied as long as it did.

North Dakota, like buzzards circling a carcass, swarmed the offensive zone the final couple of minutes, with an exhausted RedHawks corps unable to generate any offense of their own or even clear the zone, before the inevitable happened.

The hockey gods were fair in this one. The better team, the one with more skill, earned the win, but the team with less talent never gave up and salvaged a tie while making the better team earn every one of its five points.

— The power play has made a definite improvement, not just because the usual suspects have converted recently.

It’s not exactly newsworthy that Green-Bachman-Gilling-Daschke are man-advantage studs, but others are starting to chip in as well.

John Sladic scored the tying goal on Friday, Knies picked up a marker in this one, Chase Pletzke has been factor on 5-on-4s as well.

Defensemen Rourke Russell (0-2-2 on the weekend) and Bray Crowder are also thriving on power play time.

And defying any kind of statistical logic is Matt Barry, who was on the ice for all three Miami PPGs but somehow did not pick up a point.

But Kraws was solid in this one. He juggled some pucks early, which is understandable since he had not seen live action in nearly two months, but settled down and made some huge saves on high-percentage shots.

— The RedHawks seemed to get away from their quest for the perfect pass and shot, and they were better for it, as they turned the puck over too much and ended up with a season-low 16 shots on Friday.

— Miami went 30-34 on faceoffs, which was better than Friday but still not great, as North Dakota seemed to win a higher percentage in its offensive zone, leading to sustained, high-pressure possessions.

— Miami led for 44:38 on this series and trailed for 2:38 (credit UND writer Brad Schlossman for this stat, which VFTG confirmed) but finished the weekend 0-1-1.

— Would’ve liked to have seen Miami’s penalty kill tighten up on the left wing after Pinto scored from the inside of the faceoff circle, but UND still had multiple Grade-A chances on subsequent power plays after skaters were left wide open in that area.

FORWARDS: C+. The Gilling-Bachman-Green trio accounted for five points, but Knies was the only other forward to pick up a point. Carter Johnson, a healthy scratch on Friday, played with a ton of energy and generated three shots, the second-most of any forward. Bachman of course led the team with five. Monte Graham, normally a faceoff stud, won 2 of 11 draws and was kicked out of the circle numerous times this weekend.

DEFENSEMEN: B-. This corps was OK defensively, and Daschke and Russell accounted for three points. Alec Mahalak, recovering from an upper body injury, played arguably his best game of the season, and his deke and drive to the net drew a penalty that eventually led to a Miami goal. Grant Frederic was very solid in his own end and had one of his better nights of 2019-20.

GOALTENDING: B. Kraws faced a ton of A-plus chances and stopped a few of those, showing off his ability to go post-to-post to shut down 2-on-1 chances. We mentioned above he appeared a little nervous early but settled down to play a very good game.

LINEUP CHANGES: Besides Kraws occupying the net for the first time in nearly two months – replacing Ryan Larkin – Johnson was the only other player to skate on Saturday who was not in the lineup for the opener.

STANDINGS: With St. Cloud State’s win over Duluth, giving the Huskies 15 points, Miami dropped into a tie for sixth place with Omaha, as both have 12 points.

Colorado College is in eighth with 10 points. Western Michigan holds the No. 4 position with 19 points.

Miami fell one spot to No. 42 in the PairWise.

FINAL THOUGHTS: Considering Miami had opportunities to win both nights, one point on the weekend is not optimal.

But with a first-year coach heading a totally inherited roster, this season is about improving, and the RedHawks led the No. 1 team in Division one for a good portion of the weekend and rarely trailed.

This team continues to battle against more talented opponents and have success.

Miami may have earned only one of a possible six points vs. North Dakota, but to hang with the top team in Division I all weekend shows that after just a half season under Bergeron, the RedHawks are already making progress.