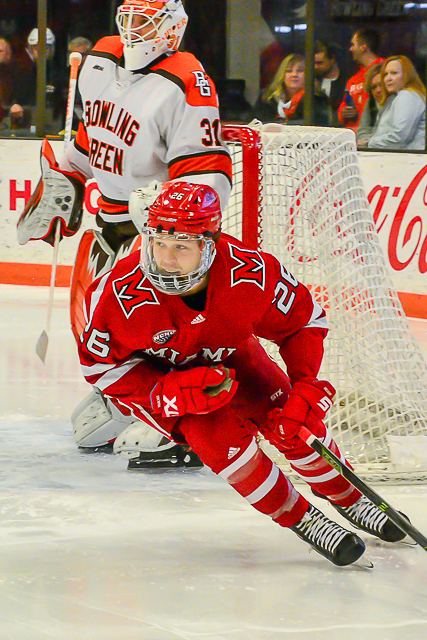 Miami pounds CC on the road

In their first game of the calendar year, the RedHawks reeled off four straight goals in the first period-plus as they pounded Colorado College, 6-1 at World Arena on Friday.

RECAP: Jack Clement gave the RedHawks (6-10-3) the early lead when he penetrated from the point to the center of the right faceoff circle before whipping one past Colorado College goalie Ryan Ruck at the 5:34 mark.

With 7:31 left in the opening period, Miami made it 2-0 on a crazy sequence as Ryan Savage poked the puck home after Ruck had vacated the crease to play a loose puck and never recovered.

Derek Daschke stole the puck in Miami’s offensive zone, skated across the top of the crease until Ruck had committed then roofed it shorthanded with 1:19 left in the opening stanza to give the RedHawks a three-goal lead heading into the first intermission.

Chase Pletzke extended the RedHawks’ lead to four 102 seconds into the second period.

Chris Wilkie scored his 14th goal of the season, wristing one through traffic to cut the Colorado College (7-9-1) deficit to three with 9:19 left in the middle stanza.

But Miami answered, as Matt Barry scored his first career goal in a RedHawks sweater when he took a pass from Ben Lown, who was behind the CC net, skated it to the inside edge of the faceoff circle and fired it home to make it 5-1 with 4:56 left in the frame.

MU capped the scoring 51 seconds into the third period on a 5-on-3 when Casey Gilling threaded a pass through the slot to Gordie Green, who slammed the one-timer into the back of the net.

It was Pletzke’s second multi-point game of the season and the first of 2019-20 for the other three. Barry recorded his first points as a RedHawk, as he played in his second career game for Miami.

— Karch Bachman extended his points streak to eight games, the longest for a Miamian since Kiefer Sherwood in 2017-18. He has assists in five consecutive contests.

— Green has points in 10 of 11 games. He and Savage both found the net for the second straight game.

— Miami has won back-to-back road games for the first time since 2016-17. Ryan Larkin stopped 25 shots en route to his second consecutive win, which has not happened since Nov. 2017.

THOUGHTS: It was pure dominance by Miami from opening faceoff to the final horn.

That’s two games in a row the RedHawks have played at top form. Both games on the road, both ended up in the win column.

What was most impressive was Miami’s killer instinct. In past seasons, especially in the winter months, two- and three-goal leads too often turned in ties and losses.

In this game, the RedHawks ran the lead to four, then five.

And Colorado College’s shot total in the third period? Six. The Tigers’ lowest shot total of the game.

Miami established the lead, expanded the lead and held the lead.

A complete effort and a textbook win for the RedHawks.

— Miami finished 35-24 on faceoffs, which is a key reason for its 5-for-5 penalty killing and 26 shots allowed. Colorado College seemed liked it couldn’t win an offensive-zone faceoff all night, and the RedHawks seemed liked they were in the attack zone all night.

— MU’s transition game was its best of the season, amazing considering the lack of live action over the past month. The RedHawks put on a clinic in this area, thus the end-to-end action and 42 shots on goal, a season best.

— Barry looked very comfortable wearing the Miami ‘M’. Besides the goal and assist, he was 7-4 on faceoffs, played stellar defense and moved the puck well. He’s been as good as advertised so far and should be a staple for MU up front for the next 2-plus seasons.

— Daschke’s goal was flat-out sick. If you haven’t seen the replay, go to NCHC.tv. Right now. And while you’re there, go to Miami’s final goal and admire Gilling’s pass to Green. Beautiful.

— Loved Pletzke in this game. He seems to be gaining more confidence every game and despite his size, he doesn’t seem to get ridden off the puck.

— That freshman line overall – Savage, Pletzke and John Sladic – was one of Miami’s best. The trio combined for four points and had plenty of offensive zone possession time.

— Lost in the lopsided win is the play of Larkin. He stopped a breakaway. He shut down a 3-on-0. His rebound control was exceptional, as it usually is when he’s going well. And he’s gone very well in Miami’s two-game winning streak.

LINEUP CHANGES: Two regular forwards were not in the lineup: Scott Corbett and Noah Jordan. Corbett missed just his second game of the season, and Jordan had dressed for 14 of the first 18.

Brian Hawkinson, scratched for the first time in 2019-20 vs. Bowling Green, returned up front.

Miami went with seven defensemen, as opposed to the 13 forwards they dressed at BGSU.

The 13-feet combo of Andrew Sinard and Bray Crowder returned, and Alec Mahalak was out. Mahalak was a late scratch in Bowling Green and appears to be suffering from a lingering injury.

FINAL THOUGHTS: Miami has been brutal in the winter months seemingly forever, but unlike in past years, the RedHawks seemed to have zero rust from the holiday break.

As we’re now about 100 days from opening night, this team is vastly superior than it was in October in every way.

Hopefully Game 1 of the calendar year is an indication that good things are in store for the RedHawks in 2020.