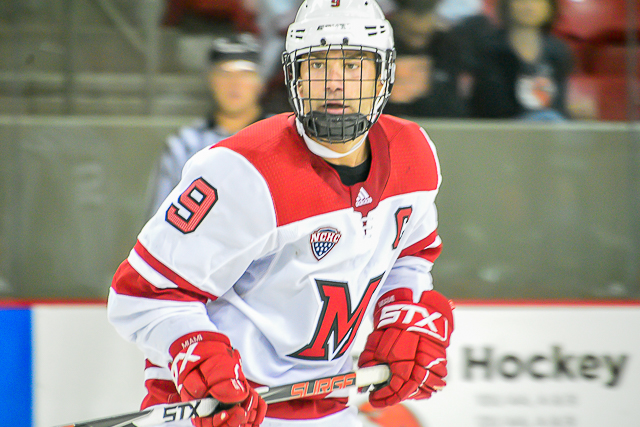 Miami pulls off win at BGSU

On Monday, Green recorded three, including the game-winning goal and an assist on the clinching tally in the RedHawks’ 4-2 win over No. 11 Bowling Green at the Slater Family Arena.

The win snapped a four-game skid for Miami (5-10-3), which wrapped up the non-conference portion of its schedule.

The RedHawks avenged a 7-4 loss to the Falcons in Oxford on opening night.

RECAP: Miami opened the scoring at 16:23 on the power play when Karch Bachman skated in from the faceoff circle and fed one through the top of the crease to Ryan Savage, who backhanded it in.

The RedHawks extended their lead just 99 seconds later when Derek Daschke stole the puck and threw it toward the net, and after the initial save was made, Christian Mohs crashed the net and scored on the backhand.

Miami made it 3-0 at the 2:46 mark of the second period when Casey Gilling threw a puck toward the net from the point with time winding down on a major power play, and Green controlled it and slid it inside the near post.

BGSU’s Sam Craggs scored on a one-time feed from Max Johnson with 7:09 left in the middle stanza to cut the deficit to two.

The Falcons (12-7-1) made it a 3-2 game when Brandon Kruse jammed a loose puck over the outstretched pad of MU goalie Ryan Larkin at the side of the net four minutes into the third period.

But with 1:28 left and an extra attacker on, Daschke cleared the zone, springing Green and Bachman for a 2-on-0, and Green slid a pass to Bachman for the one-timer into the empty net, giving both their third points of the night and sealing the RedHawks win.

STATS: With a goal and two assists, Green moved into a three-way tie with Pat Leahy and Mitch Ganzak for No. 51 all-time on Miami’s all-time points leaderboard.

— Bachman also finished with a goal and two helpers for his first career three-point game. He extended his points streak to seven games, the longest such run for a RedHawk since Josh Melnick last season.

— Daschke ended the game with two assists for his fourth multi-point game of 2019-20.

— Mohs has scored in consecutive games after notching just one career goal previously.

— Gilling tallied an assist, giving him points in three straight, and Chase Pletzke also added a helper, as he has points in five of his last six contests.

— The teams combined for 53 penalty minutes.

The RedHawks went into a packed road venue and jumped all over Bowling Green, scoring twice in the first period and coming back after intermission and pumping in another goal.

The Falcons are a quality team and pulled to within one, but Miami bent without breaking and fended off BGSU’s late surge.

For the most part, the RedHawks avoided catastrophic defensive mistakes – an area that has been an issue for most of this season – and made the Falcons create their own scoring chances.

— Miami started out with tons of energy, as Green nearly scored in the first minute, then Bowling Green took control as the teams played for over six minutes without a stoppage.

The RedHawks did little on their first power play, then a rare Daschke turnover resulted in a breakaway, which Larkin snagged cleanly.

Miami finished the opening stanza with two goals in the final four minutes and Bachman was absolutely robbed on a breakaway and an ensuing rebound seconds after he set up Savage’s goal.

Then the RedHawks made it 3-0 early in the second, which saw little 5-on-5 action for the balance.

It was survival mode in the third period, as Bowling Green fired 14 shots, but Larkin was excellent and Miami finally sealed it with the ENG.

— Special teams were just that for Miami, which scored twice on the power play and killed off all five Falcons chances, including a two-man advantage for 1:15.

The RedHawks held BGSU to three power-play shots in 8:45 of man-advantage time, which included the extended 5-on-3.

Savage and Green both scored their goals on the power play.

— The second-period parade to the penalty box actually started with a major penalty with 1:09 left in the first. Miami’s Phil Knies was hammered into the boards, drawing the 5-and-10 to Will Cullen.

After Daschke returned, MU’s Scott Corbett and BG’s Alex Barber were called for coincidentals. Bachman and Corbett both chirped with Barber the entire time the three were in their penalty boxes, which did not have glass dividers.

Within a minute of Bachman’s release, he and Green went off for roughing along with two Falcons. Barber and Corbett were still in the box at that point.

Slater Family Arena should be commended for having a pair of penalty boxes that can comfortably seat six.

— Knies skated off under his own power but he clearly took the brunt of a major hit to the side of his head. It’s unclear if he will miss additional time.

— Speaking of injuries, Alec Mahalak was a late scratch after being listed on the lineup sheet, so Miami had to play with five defensemen since the RedHawks dressed 13 forwards.

Ironically, Miami had used its extra lineup spot for a seventh defensemen most games this season prior to Monday.

Green went down to block a shot with his lower body in the third period and scared not only the bejesus but the entire A-through-Z-jesus spectrum out of the Miami hockey world as he practically swam to the bench, but after being evaluated there he returned and later capped off the game with an assist on the empty netter.

— Lost in the madness of this game was the debut of Matt Barry. He played on the third line and was solid defensively, and his best shift was early in the third period when he made a great feed that nearly resulted in a goal then ripped a one-timer that was cleanly saved seconds later.

Miami will definitely be better all around with him in the lineup.

FORWARDS: B. When Miami has struggled this season, its forwards have often had trouble completing passes, and that definitely wasn’t the case in this game, as its puck movement was good overall. Bachman and Green were the standouts among this corps.

DEFENSEMEN: B-. It’s rare a team plays all 60 minutes with only five defensemen, and that meant putting some guys in critical roles who wouldn’t normally be placed in those positions. That said, the PK was outstanding and the D-men did not make many critical unforced errors. Daschke had the lone two points from this corps on a pair of assists.

GOALTENDING: A-. Larkin stopped 35 shots including a breakaway and turned aside a number of other quality shots. His rebound control was exceptional.

Defenseman Andrew Sinard sat for the first time in 2019-20, as Miami went with Jordan as the extra forward.

It was just the second start for Larkin in the RedHawks’ last seven games.

FINAL THOUGHTS: This was the signature win to this point of the season for Miami, surpassing the victory at UNO.

Slater is a hostile venue anyway, but throw in the fact that Bowling Green was facing the coach that was hired away by Miami and that made it an even tougher place for the RedHawks to play.

More than just winning, this was an exciting game that had something for everyone. It featured sweet goals, some excellent goaltending, physical play and some post-whistle scrums and the outcome wasn’t ultimately decided until the closing minutes.

BGSU’s fans were taken out of the game early but were extremely vocal when the score tightened, and Miami brought its share from the Cincinnati and Oxford areas as well as some semi-local Toledo MU grads and friends and family of players.

They were treated to a gem of a hockey game.

In a half-season that has seen a lot of ups and down, this was the highest high to this point for Miami in 2019-20, and hopefully the RedHawks carry that momentum to Colorado College next week.