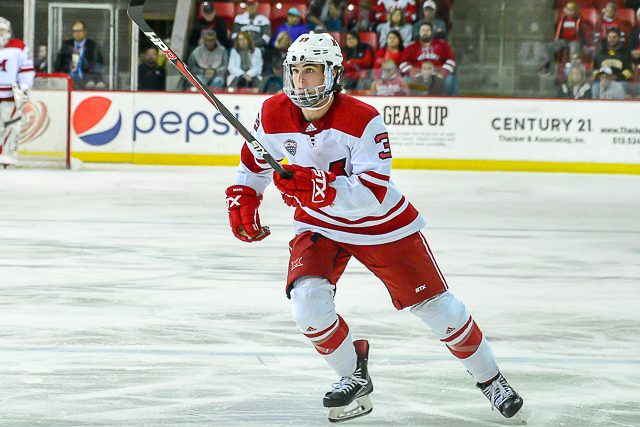 OXFORD, Ohio – A St. Cloud State 5-on-3 late in the second period ruined what was otherwise one of Miami’s best periods of the season.

With the score tied and MU controlling play, the Huskies scored on the two-man advantage to take the lead and netted the next two goals to pull away in a 5-3 win over the RedHawks at Cady Arena on Saturday.

Trailing by three midway through the third period, Miami battled back, scoring twice in the final six minutes but could not dig itself completely out of its hole.

That completed a weekend sweep for SCSU, which won 2-1 on Friday. The RedHawks (4-10-3) head into their Christmas break on a four-game losing streak, their longest of the season.

RECAP: St. Cloud State’s Nick Poehling wristed one from the high slot that slipped through traffic and inside the far post to open the scoring 10:50 into the first period.

Miami tied it just 62 seconds later. Grant Frederic picked off a long pass down the middle, tipping it ahead to Rourke Russell who found Scott Corbett on the left wing, and Corbett skated toward the net, backhanding a pass to Chase Pletzke, who shoveled it in from the right side of the cage.

The Huskies (4-6-4) took the lead for good on their two-man advantage goal, which came at the 13:11 mark of the middle frame. Jack Ahcan teed up a one-timer for Spencer Meier, whose rip from the top of the left faceoff circle beat RedHawks goalie Grant Valentine on the glove side.

SCSU extended its lead to two three minutes into the third period on a 2-on-1, with Poehling feeding brother Jack Poehling for a slam-dunk at the top of the crease.

Kevin Fitzgerald made it 4-1 in favor of the Huskies when he coralled a stretch pass along the boards, skated toward the net, deked Russell and slammed the puck home with 9:58 left in regulation.

The RedHawks trimmed their deficit to two with 5:55 remaining when Christian Mohs eluded a defender with a toe drag and fired a wrister that beat goalie David Hrenak on the glove side.

St. Cloud State squelched any hope Miami had of a comeback with 4:35 to play when Ondrej Trejbal threw one toward the net that hit the end boards and caromed to a wide-open Sam Hentges for a bad-angle slap shot from the bottom of the right faceoff circle, making it 5-2.

With 2:36 left, Miami capped the scoring as Karch Bachman fed a blind backhand pass through traffic to Casey Gilling for a tap-in from the top of the crease.

STATS: Nine different players picked up a point for Miami.

— Gordie Green recorded No. 98 for his career, as he is now two away from becoming the 53rd member of the RedHawks’ 100-point club. He leads the team with 19 and has notched at least one in eight of nine games.

— Gilling scored for the second straight night and has six points in his last six games.

— Pletzke netted his fourth goal and his third in his last seven contests. Mohs’ marker was his first this season and the second of his career.

— Andrew Sinard dished for his second assist of the season and third career point – all on helpers. Corbett tallied his third assist on the campaign.

— Bachman leads the team with a six-game point streak, going 1-6-7 in that span. He has already tied his career high in assists (9) and is one point away from his career best in points, with 15 already in 2019-20.

— Miami was outshot for the 11th straight game.

— The RedHawks have allowed nine third-period goals in their last four games and 11 in this last six.

THOUGHTS: Really hate to bring up officiating, but it played a major role in the outcome.

Not saying in any way that Miami would’ve won – St. Cloud was the better team all weekend – just that it was a huge factor in how the game played out.

The power plays were 4-1 in favor of St. Cloud State, including an extended 5-on-3. The lone man-advantage for Miami was in the third period on an obvious infraction (holding was called although it was more interference-ish) after the Huskies had taken a 3-1 lead.

How SCSU got the 5-on-3 was pretty frustrating. Russell was assessed a holding penalty, then 48 seconds later Phil Knies was crashing the net shorthanded and was whistled for goaltender interference. He had a defender draped on him and had nowhere to go.

Miami coach Chris Bergeron showed about as much emotion as he has this season after that call and had a few choice words for the officials.

The RedHawks nearly killed the two-man advantage, then Corbett was kicked out of the faceoff circle – which was rarity in this game, and honestly, it’s hard to recall a single time that happened to SCSU – leaving nine-foot defenseman Sinard to make his Miami faceoff debut.

He didn’t win it and the Huskies scored seconds later.

To that point, the second period was one of the best Miami had played this season and the score was tied at one.

That PPG made it 2-1 in favor of St. Cloud, and the rest is history.

Gilling was kicked out of the faceoff circle in the closing minutes, and as he has in the past, got vocal with the linesman.

There were multiple opportunities for the refs to whistle SCSU for penalties and each time their arms stayed down.

There were certainly other reasons why Miami did not earn any points in this game, but the officiating certainly didn’t do the RedHawks any favors on their home ice.

— The first period was pretty even, with MU leading 9-6 in shots, but SCSU took control late in that frame and the RedHawks went into survival mode to hold the score in place at 1-1 heading into the first intermission.

Miami was outstanding in the second period and didn’t deserve to head into the locker room down one after 40.

But in the third period a pair of miscues led to SCSU goals three and four, and the fifth was slammed in after a lively kick off the end boards to a wide-open Huskie.

Juniors Knies and Lown were linemates most of their first two seasons and they seemed to generate excellent chemistry with Sladic.

— The Poehlings can stop producing hockey-playing sons any time. Even with Ryan Poehling flourishing in the Montréal system, Nick and Jack combined for two goals and two assists, including the third SCSU goal which was a 2-on-1 with Nick feeding Jack.

— Valentine back in net for the second straight night was a bit of a surprise, but he played very well on Friday. He wasn’t as sharp on Saturday, but he made his share of difficult saves and certainly wasn’t the reason Miami took the ‘L’.

— That third Miami goal, with Bachman threading a backhand pass to Gilling, was absolutely beautiful to watch, including Green’s role in it as he kept the play alive along the boards. Plays like that make it easy to be a hockey fan, even during a four-game losing streak.

FORWARDS: B. Definitely a better game for this corps than Friday. More puck possession, more offensive zone time, and that’s despite having just two minutes of power play time vs. seven for SCSU. Freshman Pletzke continues to put the puck in the net – that’s four this year – and Gilling is a completely different player than in 2018-19. Mohs had a sweet toe drag before his wrister found twine.

DEFENSEMEN: C-. Alec Capstick shot a puck into a pair of skates that went the other way, and he lost his balance and was unable to get back into the play, resulting in a St. Cloud State 2-on-1 and its third goal. Russell got beat 1-on-1 on the Huskies’ fourth goal. But overall this group did a decent job of getting sticks in front of Huskies’ shots. They contributed little offensively save Sinard’s assist, although Frederic did make a nice transitional play on MU’s first goal.

GOALTENDING: C. Valentine probably would’ve liked that first goal back, but the rest were all legit, and he stopped a penalty shot in the third period. He also made several other stops on Grade-A chances and was a stud on the 5-on-3 until the final seconds, when the Huskies finally broke through on a blast from the slot. The third and fourth goals were on odd-man chances, and an unfortunate bounce and quality bad-angle shot resulted in No. 5. It’s easy to blame the goalie when an opponent scores five, and although the numbers don’t show it, Valentine played a decent game.

LINEUP CHANGES: One each on defense and offense.

Frederic replaced Bray Crowder on the blueline, and Mohs dressed in place of Noah Jordan up front and netted his first goal in 11 months.

STANDINGS: Despite being swept, Miami remains in fourth place in the NCHC, although the RedHawks have played eight conference games and all four teams below them have two games in hand.

MU dropped seven places in the PairWise in one night, from tied for 40th to a tie with Niagara for No. 47.

FINAL THOUGHTS: This isn’t exactly the way Miami wanted to head into Christmas break, but at the same time, maybe this is a good time for a few weeks off.

But it’s still frustrating to see the RedHawks go 0-4 against a pair of teams that were 3-6-3 and 2-6-4 entering their series.

This game is a microcosm of the first half of MU’s season: The team played hard but defensive lapses were killers.

Hopefully we continue to see the former and less of the latter in 2020.

I've been writing about hockey since the late 1990s. First it was the Cincinnati Mighty Ducks and the Cincinnati Cyclones for the Cincinnati Post, and most recently with WCPO and the Blog of Brotherhood online. View all posts by rednblackhawks