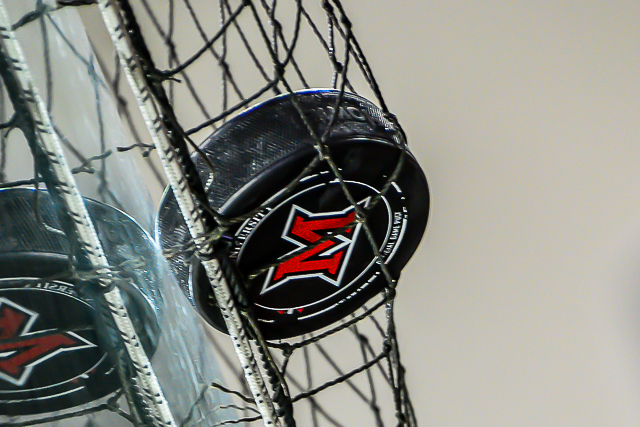 Connecticut and Miami meet for just the second time in the teams’ history, with the RedHawks sweeping the Huskies in Oxford two years ago.

It will be the first time Miami has played on an NHL team’s (or in this case former NHL team’s) ice surface since its final CCHA Tournament in March of 2013.

A look at this weekend’s series:

NOTES: Despite boasting a plethora of NHL draft picks on its teams the past couple of seasons, Connecticut has struggled mightily on the ice.

Scoring has been an issue for UConn thus far in 2019-20, as the team is averaging just 2.33 goals per game and has only netted four or more once.

Through 12 games, no one on the Huskies has more than seven points.

Among forwards Jachym Kondelik, a Nashville selection, leads the team in goals with four and is tied for the team lead in points. Alexander Payusov also has seven points, including five assists.

Freshman Yan Kuznetsov leads all defenders with seven points on a goal and a team-best six helpers.

Another rookie blueliner, Harrison Rees, has notched one goal and three assists.

Of the seven defensemen Connecticut has used this season, four are freshmen.

In net, Tomas Vomacka has played all but nine minutes for the Huskies. He has a 3.33 goals-against average and a .900 save percentage.

Connecticut is very young with a European flare. The Huskies have seven freshmen and nine sophomores, and three of their players are Russian, three more are from the Czech Republic and another was born in England.

UConn has struggled on special teams, as its power play is clicking at just a 10.5 percent clip. Its penalty kill rate is 73.2 percent, ranking near the bottom of Hockey East.

Miami is 2-2-2 on the road after earning five points last weekend in Omaha.

Regular starting goalie Ryan Larkin was banged-up and missed that series, but back-ups Grant Valentine and Ben Kraws were both outstanding in his absence and are making the case for more time between the pipes.

Offensively, Gordie Green and Ryan Savage have been the hottest RedHawks with six points apiece in their last five games. Green has points in each of his last five games, including a two-goal performance last Saturday.