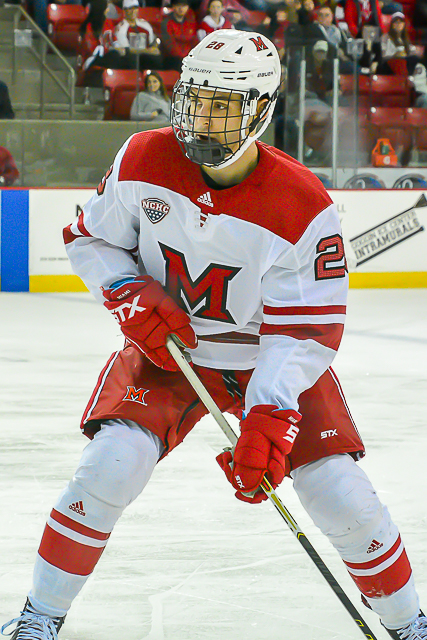 Miami nipped by Duluth in finale

OXFORD, Ohio – For the second straight night, Miami was outshot by a 2-to-1 ratio.

But unlike in the series opener, the RedHawks were unable to scavenge a win, falling 3-2 to Minnesota-Duluth at Cady Arena on Saturday.

Four of the game’s five goals were scored on the power play – two each – and neither team found the net over the final 24 minutes.

RECAP: Just 3:42 into the first period, Nick Swaney tipped home a waist-high wrister from Nick Wolff in the slot to give Minnesota-Duluth the early lead, the lone even-strength goal of the game.

Miami tied it in the final second of the opening frame on a tic-tac-toe passing play as Chase Pletzke finished off the one-time feed from Gordie Green through the slot after Derek Daschke slid a pass through traffic to Green.

The Bulldogs took the lead for good 5:38 into the second period when Tanner Laderoute slammed home a rebound into a largely-vacated net off the initial shot by Cole Koepke on a 5-on-4.

Just 97 seconds later on another power play, Noah Cates battled for a loose puck with RedHawks goalie Ryan Larkin then gained control of it, wrapped around the back of the net and stuffed it in the short side to make it 3-1.

Miami’s Rourke Russell wound up from the point and slung a wrist shot past UMD goalie Hunter Shepard with 4:26 left in the middle stanza to cut the deficit to one.

The RedHawks were limited to five shots in the third period and none of their lone man advantage of that frame.

STATS: It was nice to see Miami generate both goals from sources other than Green or Karch Bachman.

Pletzke netted his second of the season and Russell picked up his first, with his last goal coming on March 2 vs. – of all teams – Minnesota-Duluth.

— Green and Daschke earned assists to extend their points streaks to three games.

— Bray Crowder and John Sladic picked up the other helpers. Crowder has four on the season, and Sladic notched his third assist and fifth point.

— Larkin stopped 32 shots and was named second star of the game.

— The Bulldogs finished with six power plays, including 1:24 on a two-man advantage, while Miami went on the man advantage three times. UMD outshot the RedHawks, 18-3 with the extra skater.

STANDINGS: Four games into the NCHC season, Miami is 1-3, tied with Omaha and Denver for fifth place in the conference, although Omaha has played just two league games.

St. Cloud State is in last, but the Huskies have also logged just one conference series.

Miami dropped just one spot in the PairWise Rankings, from No. 38 to No. 39.

THOUGHTS: It’s easy to blame the officiating, which did seem to lean in UMD’s favor with a 6-3 power play advantage including the extensive 5-on-3, but both teams scored twice on the man advantage, making that a wash.

Ultimately, the better team won. The Bulldogs are two-time defending national champions and ranked No. 6 in Division I for a reason.

UMD’s defenders did a phenomenal job of shutting down Miami in the third period, allowing just five shots on goals despite an MU power play. Actually they defended well all weekend.

Minnesota-Duluth was superior in a number of areas.

But the RedHawks came away with the split and outscored the Bulldogs for the weekend, and while it’s never fun to lose, a 1-1 series against this team, at this point is a success.

Especially the way it happened, with Miami playing the game the right way.

— The team defense once again allowed a high number of shots and a decent number of quality shots, but in previous weekends the RedHawks practically had runway lights down their own slot and marshalls directing opposing skaters toward the Miami net.

— The first RedHawks goal was one of the prettiest of the season. The passing combination of Pletzke to Daschke to Green to Pletzke was even more remarkable considering time was winding down in the period. But none panicked, and the puck crossed the line with 0.7 seconds left.

LINEUP CHANGES: Just one and it was on defense. Alec Capstick dressed for the ninth time this season, and Grant Frederic was scratched.

Ben Lown missed both games this weekend with a lower body injury and is not expected to return in the next couple of weeks.

FORWARDS: C-. Same problem as Friday: Not enough shots by this corps with the exception of Bachman. Bachman finished with five SOG while the rest of the forwards combined for seven. For the weekend it was Bachman 12, Rest Of The Forwards 14. Pletzke picked up the only goal among this group and looked right at home on that top power play unit. Monte Graham went 9-3 on faceoffs and was 20-9 on draws for the weekend. Noah Jordan blocked four shots.

DEFENSEMEN: B-. Minnesota-Duluth fired a lot of shots, but as mentioned above, fewer than in previous weekends were of the A-plus variety and 18 of 35 were on the power play. Russell scored the second Miami goal and blocked three shots, and Crowder played one of his better games, also rejecting three shots and picking up an assist, but he took another minor penalty.

GOALTENDING: B+. Watching live from close range, it looked like the first goal Larkin allowed was one he wanted to have back, but it was actually an excellent tip in the slot that sent it into the twine. The second was on a big rebound, but from live action and replay it was hard to tell who the puck hit before caroming to Laderoute. The third was a wraparound. Larkin made a number of quality saves, including one in the third period that it looked like hit his skate as he stacked the pads. Very good game overall.

To this point, the RedHawks’ defensive play – from both defensemen and forwards – can best be described as haphazard.

Too often, players watched the play instead of participating, skated to the puck rather than hold their position or were so out of position they never got into the right spot to defend.

But at least for one weekend this group figured out that aspect of playing in the NCHC.

Out-manned or not, if Miami continues to play as hard, as disciplined and as structured as it did this weekend, many more wins will follow.

And they will come sooner than later.