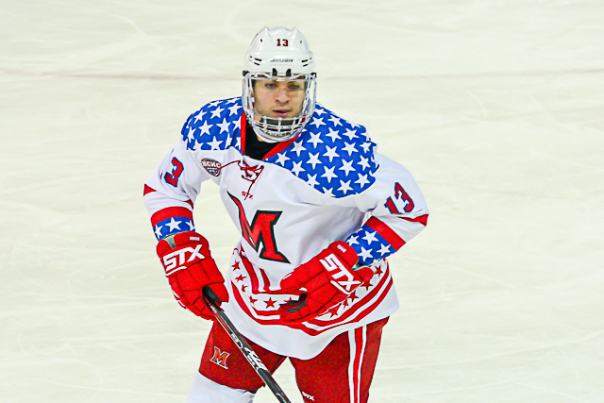 Miami holds on vs. Ferris

OXFORD, Ohio – Miami won its first game in 239 days on Friday, but the RedHawks had to survive a bizarre third period to hold onto victory No. 1 for coach Chris Bergeron.

MU killed off a major and two minor penalties in the final 16 minutes of its 4-3 win over Ferris State at Cady Arena.

The RedHawks were winless in their previous 10 games (0-9-1) and had just two victories since last Thanksgiving. Their last win was Feb. 22 at Denver.

Derek Daschke wristed a shot from the point and Ben Lown tipped it home in the slot 4:18 into the game to give the RedHawks the early lead.

Noah Jordan extended the Miami lead with 4:05 left in the opening stanza when he penetrated the zone, skated in to the edge of the faceoff circle and wristed one just inside the far post for his first career goal.

Less than two minutes later, Casey Gilling whipped a pass through the slot to Karch Bachman, who caught the puck on his backhand and shoveled it in while falling down at the edge of the crease, making it 3-0.

But the Bulldogs (1-1) cut the deficit to two with 5:02 left in the middle frame when Lucas Finner skated the puck around the back of the net and jammed a wraparound inside the near post.

Forty-three seconds after that goal, Jake Transit tipped a shot into the net from the side of the cage to make it 3-2.

Miami regained its two-goal cushion with 2:15 left in that period when a shot from Phil Knies was denied and the rebound hit a Ferris State defender at the top of the crease and caromed to a wide-open Gordie Green for a tap-in on the power play.

Oskar Andren scored for the Bulldogs four minutes into the third period when he ripped a one-timer from the slot off a feed by Jake Willets from behind the net on a delayed penalty.

That call ended up being a major on Miami, which the RedHawks killed off, in addition to a pair of minors later in the frame, to preserve the win.

Daschke has five helpers in the last two games.

– Bachman’s goal gives him three on the season and five in his last five games dating back to the 2018-19 finale.

He is also the only RedHawk with points in all four contests.

– Green’s goal was his team-best fourth on the season, and he is also tops on the team with six points.

– John Sladic picked up an assist to give him three points in his last two contests.

– Jordan’s goal was the first of his career, as he logged just six games last season and notched two points, both on assists.

THOUGHTS: Hopefully most of Bergeron’s wins at the helm of Miami hockey come easier than this one.

We’ll go over some of the late highlights in a little bit, but this team absolutely played its tail off, and that’s why the RedHawks came away with the victory.

And while it sounds like a cliché or an easy answer to say playing hard made the difference, Miami really did skate its hind quarters off on Friday, which wasn’t always the case in 2018-19.

– We’ll get the downer portion of the thoughts segment out of the way now so we can finish with cuddly positives.

Ferris State had a lot, A LOT, of quality chances and ended up missing the net or connecting passes far too often. A better team would’ve capitalized.

Bulldogs skated unabated to the side of the net in the offensive zone numerous times, and any one of a handful of pass attempts to any of those wide-open skaters would’ve resulted in an easy FSU goal.

Miami was also facing a Ferris State goalie making his collegiate debut in Carter McPhail. Maybe if regular starter Roni Salmenkangas gets the nod in this one he shuts down one of more of the RedHawks’ scoring plays.

– While Ferris State did have trouble finishing and started a rookie goalie playing in his first D-1 contest, Miami has been playing without one of its top defensemen, Alec Mahalak, all season because of a lower-body injury.

He is still in a boot.

Forward Scott Corbett was also missing from the lineup, and the reason is unclear. His play has certainly warranted a regular starting spot up front, and without him Miami loses a key physical weapon who is also a solid points producer.

Point being: Both teams faced challenges in this contest.

– So let’s go over this game from a spectator’s perspective, and for those of you who didn’t see this game live, it was the proverbial emotional roller coaster.

Everything was going great until midway through the second period when Miami went on a major power play after Ryan Savage was kneed during an open-ice hit at center ice (Savage missed a shift but did return).

The RedHawks did little on that extended man-advantage, and as so often happens when a team kills off a five-minute penalty, Ferris State seized the momentum.

Seventy-three seconds after that major expired, the Bulldogs had scored twice to cut a 3-0 Miami lead to one.

The fourth RedHawks goal, scored by Green with just over two minutes left in the second period and two minutes after the second FSU tally, was crucial. If it didn’t flip the momentum back to Miami it at least leveled it off.

So it’s 4-2 RedHawks heading into the third. Brayden Crowder buried a guy, face first into the boards four minutes into that stanza, and seconds later on the delayed penalty Ferris State scores.

Now it’s a one-goal game with FSU headed to a five-minute power play. Not the position Miami envisioned itself in late after jumping all over the Bulldogs in the first period.

But the RedHawks killed the major. Then another penalty against Miami, which the team killed.

Then with about 2:30 left it appeared Ferris State shot the puck directly out of play above Larkin from the point, which would have moved the ensuing faceoff to neutral ice. Instead it was ruled the puck was tipped and the faceoff was to remain in the Miami zone (the angle I was at, I had a great look at this and it did not appear the RedHawks affected the shot).

The reason we mention this is: The Bulldogs won the draw and held the puck in their offensive zone for about a minute before drawing a hooking minor on Gilling with 1:22 left.

So because of that tip call, Miami was forced to complete regulation shorthanded, and essentially Ferris State went on a 6-on-4 because the Bulldogs pulled McPhail.

Then is got even weirder, as Lown went in for an empty netter, but the Bulldogs’ defender riding Lown intentionally knocked the net off its pegs, which resulted in a penalty shot. FSU was also whistled for a high sticking minor on the play.

With Ferris State having an empty net, it would seem logical Miami would’ve been awarded a goal in that circumstance, but instead Green took the shot and was denied.

I recall in another lifetime the RedHawks were given a goal when a skater – I believe it was Marty Guerin? – was hauled down from behind while skating in for an empty netter. If memory serves that game was at the old Goggin.

It seems like if a team is awarded a penalty shot and the defending team had its goalie pulled at the time of the infraction, a goal should be awarded to the attacking team.

Anyway, despite being shorthanded due to the high sticking penalty with the faceoff in its own zone with under a half minute left, the Bulldogs forced a tense draw in the Miami zone with 3.6 seconds remaining and mercifully time expired without FSU firing a shot.

In terms of waiting for the clock to run out in a third period, this game rivaled the 1980 U.S.-Russia Olympic quarterfinal.

FORWARDS: B. Because forwards tend to be quicker, that speed makes them stand out more when they’re going full throttle. And this corps was. The Sladic-Lown-Christian Mohs generated instant chemistry and created a lot of energy. Monte Graham is becoming a physical force and his overall game continues to develop. A rejuvenated Gilling won 16 faceoffs and was again an excellent complement to Bachman and Green on the top line, but he did take two penalties. The PK was solid but this group earned average marks defensively overall.

DEFENSEMEN: C. Still too many quality chances allowed by both this corps and the backchecking forwards, but the blueliners were largely responsible for Ferris State finishing 0-for-6 on the power play including that critical major in the third period. Daschke was first star with his three assists, and he fared as well defensively as he did in the points column, making smart plays over and over in his own zone. Jack Clement seems to be gaining confidence, as does Andrew Sinard, who is starting to play a more physical game and using his ridiculously long reach to poke pucks away from opponents. Rourke Russell was very solid on D as well in this game.

GOALTENDERS: B. Larkin made a couple of saves on high-quality shots and was solid on the rest of the opportunities he faced. The first Ferris State goal was on a wraparound which he had a chance to slide over and defend but the last two were destined for the net. He saw a lot of rubber late and stood tall. This was his best performance of this early season. It’s hard to say if he will get the nod again on Saturday or if Bergeron will come back with freshman Ben Kraws.

LINEUP CHANGES: Corbett was out, as was Chase Pletzke up front after both dressed last Saturday. Carter Johnson returned after serving his one-game suspension for kneeing, and Crowder – a healthy scratch last Saturday – served in the extra skater role.

FINAL THOUGHTS: Regardless of the opponent or the circumstances, Miami has to feel a boost of confidence as well as burden lifted after snapping its winless skid.

There’s no doubt the RedHawks will be undermanned against some of the top-tier teams they will face later this season, but if they keep playing as hard as they played in this game, the wins will come.