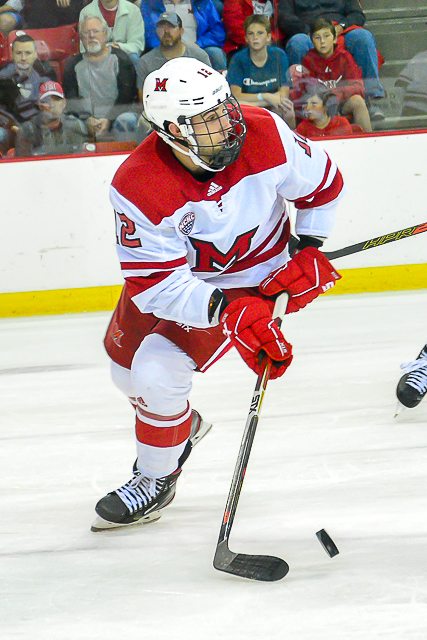 Down 3, Miami rallies to tie UNH

OXFORD, Ohio – Trailing by three, Miami rallied for four straight goals to take a 4-3 lead and was within six minutes of its first win under Chris Bergeron.

But New Hampshire evened the score late and the teams skated to a 4-4 tie in the series finale at Cady Arena on Saturday.

Freshmen played a key role for the RedHawks, as John Sladic scored his first two career goals and Chase Pletzke netted his first as a Miamian. It was also the first start for freshman goalie Ben Kraws as the RedHawks held an opponent to fewer than five goals for the first time in eight games.

Nine minutes into the first period, Angus Crookshank tipped home a blue line wrister from Max Gildon seconds into a power play to give New Hampshire the early lead.

Kohei Sato extended the Wildcats’ lead to two when he skated in alone and deposited the puck under Kraws at the 6:28 mark of the second period.

With 6:19 left in that frame, Miami finally got on the board when Pletzke skated uncontested through a flat-footed New Hampshire defense and snuck a shot just inside the crossbar.

Just over three minutes later, Casey Gilling cut the lead to one when he pulled up at the top of the faceoff circle and floated a wrist shot through traffic and into the net.

Sladic tied the score with eight seconds left in that period as he clutched and wired one home from the faceoff dot.

It was Sladic again just 83 seconds into the final stanza as Scott Corbett skated around the back of the net and slid a pass across the top of the crease to Sladic, who crashed the net and banged the puck home to give Miami its first lead of the series.

But UNH tied it with 5:46 to play, as Charlie Kelleher’s slap pass from the point connected with Patrick Grasso at the side of the net for an uncontested one-timer.

Miami finished the game on the power play for the final 1:39 but could not score on either of the shots it generated during that advantage.

STATS: Sladic scored a pair of goals for his first career points, and Pletzke also picked up his first D-1 point.

— Karch Bachman is the only Miami skater with points in all three games, as he notched one assist to give him two goals and two assists.

— Miami may have halted its losing streak at nine games, but it is still winless in its last 10. The RedHawks are suffering through one of their roughest stretches in history, as they are 2-20-5 since last Thanksgiving.

THOUGHTS: As with all ties, there is plenty of good and bad.

The boom: Freshman scoring. These guys are the future. Sladic and Pletzke netted three of the four goals in this game. Noah Jordan is just a sophomore and played the best game of his Miami career. Classmate Monte Graham seems to get better every game as well. Kraws was solid in his first D-1 start.

The bust: The penalty kill has been atrocious. The slow starts have been maddening. Too many quality chances against vs. a veteran defenseman squad, and the goaltenders haven’t stopped enough Grade-A chances.

FORWARDS: B. Much better. It’s hard to emphasize enough the importance of having freshmen score three goals when the team is in major rebuild mode. Gordie Green didn’t record a point but he’s elevated his game a level for his senior year. Bachman continues to excite with his speed and the resulting scoring opportunities. Graham has taken a major jump this season. Noah Jordan dressed for the first time this season and played the best game of his career.

DEFENSEMEN: C+. Improved over Friday. Jack Clement made some key plays in the third period, Andrew Sinard upped his physical presence and as a result his over defensive game improved, and Daschke again played at a higher level than in 2018-19, showing significant maturity for his age as a two-way blueliner.

GOALTENDING: C+. The raw numbers for Kraws are: 21 of 25 saved for an .840 save percentage. There were some good saves, and Kraws appears to be extremely athletic for a 6-feet-4 netminder, but he didn’t make any stops of the spectacular variety. Like Jay Williams early in his career (who was also 6-4), Kraws almost appeared to overcommit from side to side at times, probably as the result of nervous energy. But for a freshman in his starting debut on a team that is at times defensively challenged, this was a quality start to his career. And hey, Miami had allowed at least five goals in each of previous eight contests, so at this point we’ll take the improvement.

LINEUP CHANGES: Pletzke returned to the lineup, and he netted his first career goal. Jordan dressed for the first time this season and notched a helper. Both are forwards.

Defenseman Bray Crowder was benched, and forward Carter Johnson was suspended for a kneeing incident on Friday.

It was the first time this season Miami used 13 forwards.

FINAL THOUGHTS: Honestly, when Miami was down 3-0 in the second period, the thought here was: If the RedHawks can’t beat a Hockey East cellar dweller in either game of a two-game series on its home ice, will Miami ever win a game?

But then that MU team that made Period 3 vs. Bowling Green exciting showed up, and it scored four unanswered goals to take the lead.

It’s amazing how one’s hypothesis of the next five months can be swayed in less than a period, but to the point when UNH took its three-goal lead again on Saturday, Miami had shown only short bursts of life in 4½ periods of hockey on the weekend.

We’ll need to see more of that gear from the RedHawks this year – which they did display at times early in 2018-19 – if they hope to have success this season.