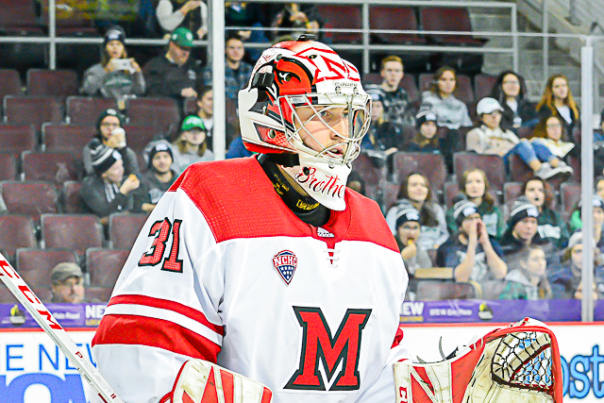 In 2019-20, Larkin has shifted into the mentor’s role in his senior campaign, as highly-touted freshman Ben Kraws prepares to make his Miami debut this fall.

“U-Haul was obviously great to have, and he had a lot of experience, so it was really cool for him to come in and it was really good for me to have him here to be able to kind of mentor me and lead me through the ups and downs of whatever the season brings,” Larkin said. “Now, I guess that’s kind of my role, so I’m trying to do the same thing that U-Haul did for me for Kraws. Kraws is a great kid and a really hard worker so I’ve got to work just as hard to show him how hard he needs to work and what it takes to play at this level.”

In three seasons at Miami, Larkin has logged 5,672 minutes of ice time and earned 30 wins including five shutouts, all on sub-par teams.

And he appears to be in the best shape of his career heading into his final campaign in Oxford.

“Ryan’s looked great – I’ve skated with him all summer, he’s looked great all summer,” defenseman Derek Daschke said. “He’s down some weight, he’s in a lot better shape, not that his shape was his problem last year, he was great last year too, but he’s looking really good and the boys have a lot of confidence in him.”

Also returning is Grant Valentine, a junior who appears to have elevated his game after playing just nine minutes in two seasons.

The wild card is Kraws, who was ranked among the top 50 North American-born goalies and has played the last two seasons with Sioux City of the USHL.

Coach Chris Bergeron said Larkin has been exemplary at transitioning into a mentor role.

“I do think (Larkin) is handling it great – he’s a great kid – and Ben Kraws is a young guy just looking to figure out this college game, and Grant Valentine’s had a really good training camp, a good September,” Bergeron said. “I think we’ve got some depth in goal. It obviously starts with Larkin, he’s somebody we’re going to need to have a good senior year and we have no reason to believe he won’t individually, and we’ll also look to him and Grant to help the young freshman figure out this college thing both on and off the ice.”

Kraws’ save percentage has been just .895 each of those campaigns with USHL Sioux City after putting up outstanding numbers in the OJHL.

But he is coming off an outstanding playoff year for the Musketeers, and hopefully he rides that confidence into this season.

Larkin has battled durability issues in his three years at Miami, and with Kraws potentially in line to take over starting duties in 2020-21, Kraws should see his share of ice time this season, especially since Bergeron said he favors using multiple goalies.

“My history going back to when I was an assistant coach where we had one guy play Friday and one guy play Saturday – I like that,” Bergeron said. “We took that to some pretty good success, and I would like to do that. I’d like to have depth at that position. The way you have depth at that position is getting guys into games. Now what those guys do with those opportunities, that’s on them, and that’s what’s ended up happening is one outplaying the other and then you start to play the guy who’s playing better more.”

When Bergeron was an assistant with the RedHawks, he oversaw the Jeff Zatkoff-Charlie Effinger tandem (“Jeff and Eff”) as well as the duo of Cody Reichard and Connor Knapp.

Both pairs largely split time with the exception of Zatkoff’s final season in 2007-08 when he recorded arguably the best single-season goaltending numbers in the history of the program.

“I like it where you go into a weekend and one goalie has to win one night and the other goalie has to win the other,” Bergeron said. “The weight of the world isn’t on their shoulders, they don’t need to put the team on their back, just you take care of Friday night and you take care of Saturday night. I don’t know if that’s where we are right now, but my comfort level is more there than handing the net to one guy and riding him.”