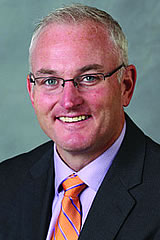 It made too much sense.

He went to Miami. He starred at Miami. He played parts of five pro seasons down the street from Miami for IHL Cincinnati. He was an assistant at Miami. The quality of work he did at Miami was fully realized when he left Miami to become Bowling Green’s head coach. He won as a head coach away from Miami.

So he seems like the logical choice to return to Miami when its coaching gig becomes available, right?

It’s rarely that simple in these situations.

But in this case, it was. The completely obvious candidate to take over the reins got the job.

And that’s definitely a good thing for the program as well as the school.

In addition to all of his credentials – being an assistant during both Miami Frozen Four appearances and pushing Bowling Green to its first NCAA Tournament berth in 29 years last month topping the list – he already bleeds Miami red.

He knows what it’s like to play in the NCAA Tournament donning the ‘M’, as he was captain of the first-ever Miami team to qualify in 1993.

And he was there in D.C. in 2009 when the RedHawks came within a minute of a national championship and was on the bench the next year, guiding them to another Frozen Four berth.

He’s already been there, done that with this program. He made the team better on the ice as a forward and again off the ice as an assistant coach.

And in his first Division I head coaching gig, he took a Bowling Green team that was at an all-time low point and returned it to relevance, winning at least 21 games each of the past five seasons including 25 in 2018-19.

Yes, selecting Bergeron to guide RedHawks hockey through its next chapter was the obvious choice, but it was also the right choice.